Use Pokémon GO to lure real-life people to your business. | EKR

Use Pokémon GO to Lure Real-Life People To Your Business 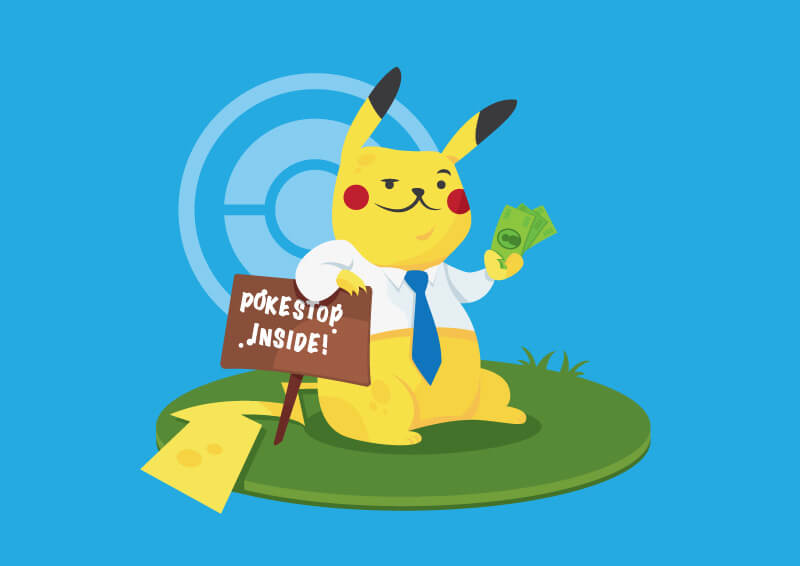 If you have a business with a storefront and you’re not dropping Pokémon GO lure modules on nearby PokéStops, you’re a crazy person. Right now, this could be the single most effective thing to drive foot traffic to your location. Here’s what it looks like when people set up lure modules at a PokéStop in the game. The following tweet is from near our offices in Provo, Utah. 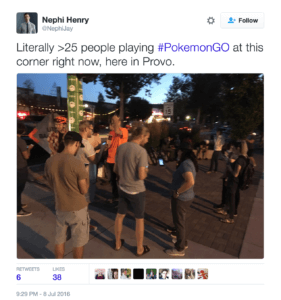 What is a PokéStop?

PokéStops are little points on a map where Pokémon Trainers congregate to play the game. Attached to places of interest—murals, churches, statues—they will drop items for players. It’s like a scavenger hunt, and players have to get out of the house to have a good time playing the game.

Since Pokémon GO’s launch last Thursday and at the time of posting, the mobile game is about to “surpass twitter in daily active users on Android” according to this article on Forbes. It’s a social phenomenon. As a marketing agency, our team’s minds are racing. How can our clients make Pokémon GO a part of their marketing plans? We’ve got some cool ideas, and we’ll update this post frequently in the following days and weeks to share our ideas. For now, we’ll start with how you can set up a lure module at the PokéStops near your location.

How to set up your first lure module.

Lure modules hold up to their namesake. When a Pokémon GO player places a lure module on a PokéStop, the location becomes a hotspot for capturing wild Pokémon. Your goal should be to place lure modules on all PokéStops surrounding your business’s location. 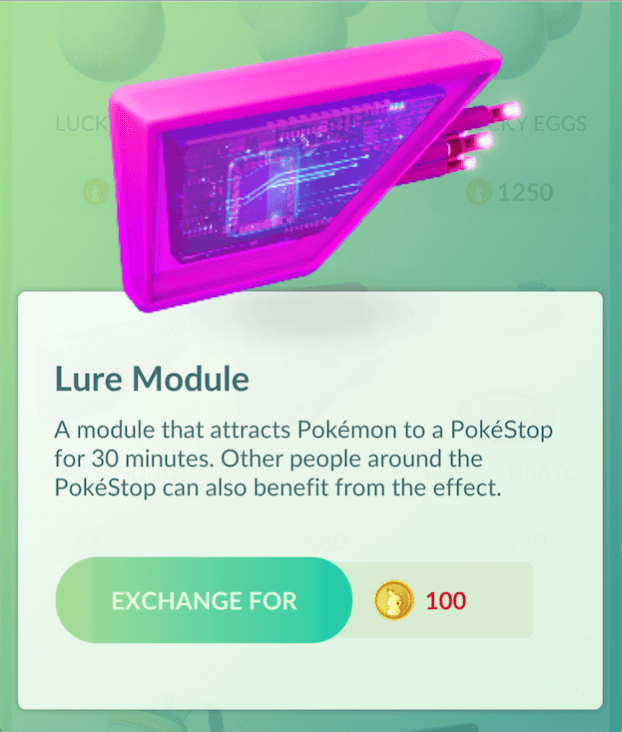 Download the Pokémon GO application from the App Store or Google Play. Open the app and sign in using your Google account or by setting up a free Pokémon Go “Trainer Club” account. Once you’re signed in you can set up a profile and start attracting Pokémon trainers to your location.

If you ever played the original Pokémon games, this step will be familiar. A Pokémon professor will show up to introduce you to the game and walk you through becoming a Pokémon trainer. Follow his instructions. Pick an appearance, a name and a starting Pokémon.

Step 3: Place a lure module on a PokéStop near you.

After you’ve received instructions and chosen your first Pokémon, you can start exploring the augmented reality around you. You may notice markers like the one shown below. This is a PokéStop with an active lure module. 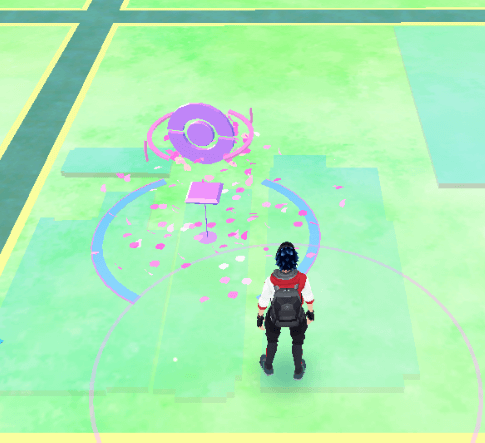 PokéStops are geographically marked locations that dispense Poké Balls and other items. When you’re physically close enough to its location, you can tap the marker to collect free items. If your business is located within the range of a PokéStop, you should start noticing above average foot traffic and groups of trainers out on “Poké strolls.”

Every PokéStop has a slot for a module. Modules can be placed at a stop by any user and will attract wild Pokémon to its location for 30 minutes. PokéStops with active modules are set apart with falling pink confetti and can be seen by players within a radius of approximately one mile. Anyone can physically move within range of an active module and enjoy its benefits until it expires.

Not unfairly, modules must be purchased with Pokécoins, which cost real money. A single module costs 100 Pokécoins ($0.99) and a pack of 8 costs 680 ($6-7). Modules and Pokécoins can be purchased from the app by tapping on the Poké Ball icon on the bottom of your screen.

Make Pokémon GO a part of your marketing plan.

We’ll have more to come on this subject as we observe the behavior of Pokémon trainers out there. We don’t think that Pokémon GO is a fad. It’s a game that gets people out more. When they are out walking around your location, they’re already in a mindset of exploring. And they are in a good mood. With that knowledge, come up with exciting ways to connect with them. Place signage with Pokémon lingo outside your location inviting players to come inside. For example, “Can’t catch ’em all without food in your belly.” Take samples of your product to PokéStops near you—and place lure modules on them. Then wait. And share. Oh, and you should catch more Pokémon while you’re at it.

Picture a PokéStop with your brand on it.

So it sounds like we were on to something when we wrote this post. Niantic CEO John Hanke hinted (with few details) in an interview with the Financial Times that businesses will soon be able to sponsor locations. We can assume that companies will be able to pick PokéStops near their locations or sponsor new ones. Nintendo will cash in per PokéVisit.

In an article by Gamespot, we learn it’s possible for players to request new PokéStop locations. So the capability is there for businesses to claim a branded stop at their location. We’re just not sure what that will look like for sponsors. But we took a stab at the concept: 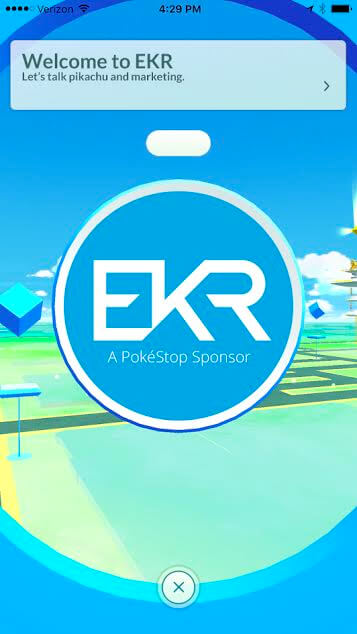 We hope that eventually, brands will be able to advertise with offerings at the PokéStops they sponsor. Right now, it’s looking like a great play for retailers, with a walk-in location. If on the 14th floor looking to drive foot traffic to your location, sponsoring a stop street-side isn’t going be practical. We have a feeling Niantic has a few antics up their sleeve to collect on this wildly popular game. They’d be smart to offer ways for non-retail industries to play. 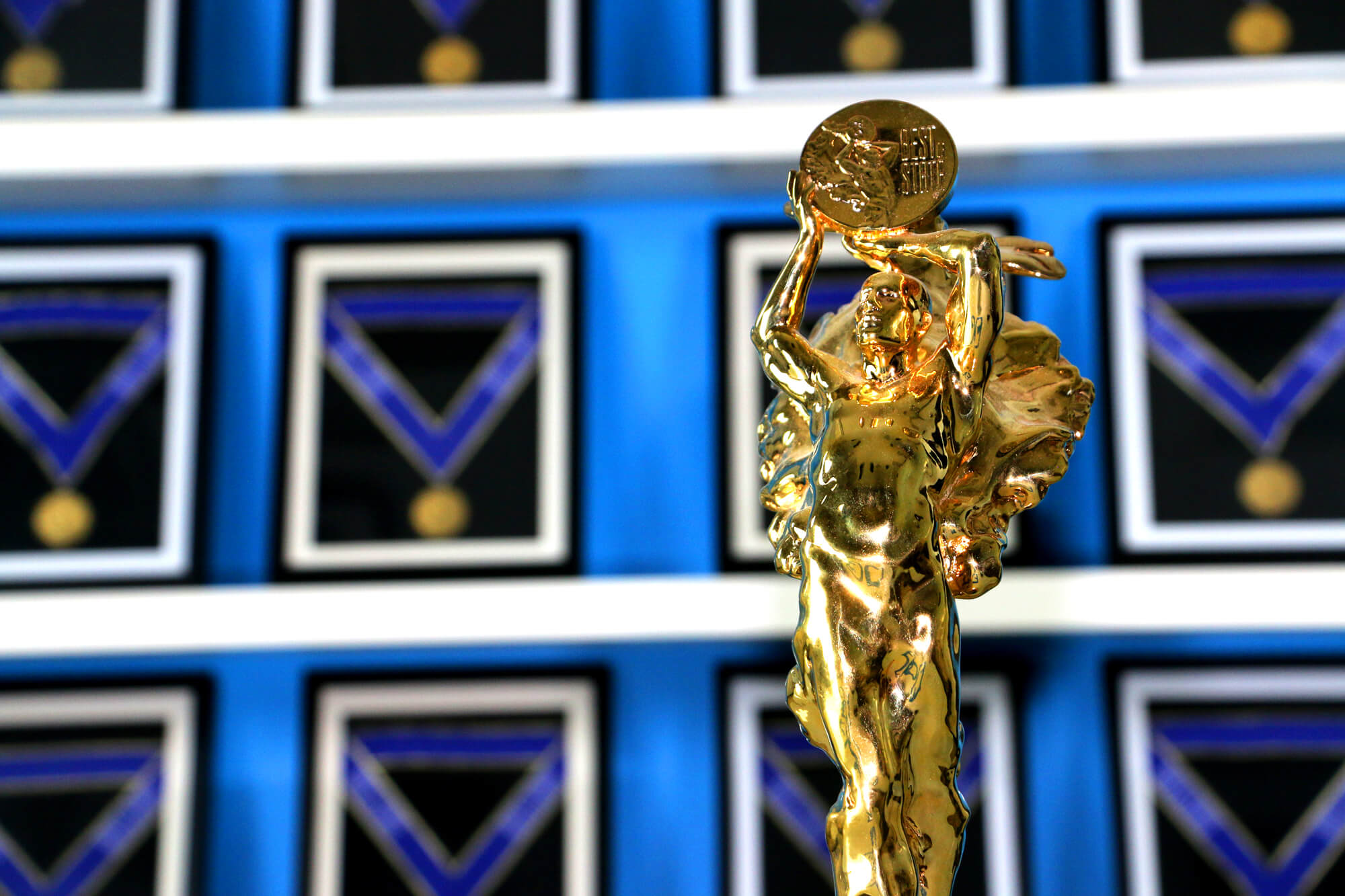